Prior to 2001 the sampling of postal votes in elections was of little value to candidates and their agents because the number of postal votes was low and the envelopes were opened only shortly before the count, giving them little information and little time in which to use it. Prior to 2001 voters had to state a reason for applying for a postal vote or to obtain attestation of illness from a doctor. In February 2001 it became possible for anyone to get a postal vote on demand in Great Britain. This led to a massive rise in the proportion of votes in the UK General Elections from 2.3% in 1997 to 18.8% in 2010. 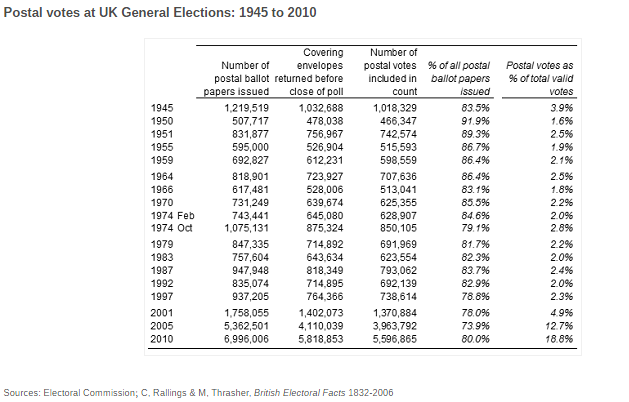 [Figures from House of Commons Library]

[Figures from House of Commons Library]

With over fifty percent of voters in Houghton & Sunderland South voting by post, if candidates could have sampled from those postal votes ahead of the count they would have been able to make confident predictions of the final result, but even sampling from the national average of nearly 19% postal votes would give agents valuable information on how their campaigns were going.